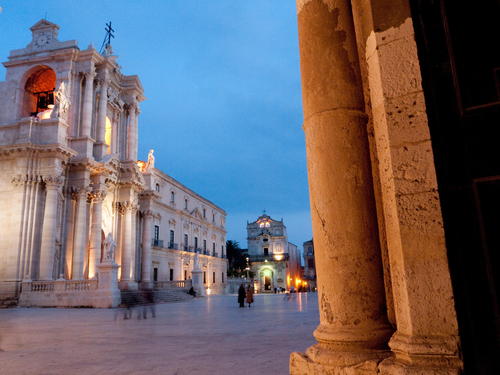 The site consists of two separate elements, containing outstanding vestiges dating back to Greek and Roman times: The Necropolis of Pantalica contains over 5,000 tombs cut into the rock near open stone quarries, most of them dating from the 13th to 7th centuries BC. Vestiges of the Byzantine era also remain in the area, notably the foundations of the Anaktoron (Prince’s Palace). The other part of the property, Ancient Syracuse, includes the nucleus of the city’s foundation as Ortygia by Greeks from Corinth in the 8th century BC. The site of the city, which Cicero described as ‘the greatest Greek city and the most beautiful of all’, retains vestiges such as the Temple of Athena (5th century BC, later transformed to serve as a cathedral), a Greek theatre, a Roman amphitheatre, a fort and more. Many remains bear witness to the troubled history of Sicily, from the Byzantines to the Bourbons, interspersed with the Arabo-Muslims, the Normans, Frederick II of the Hohenstaufen dynasty (1197–1250), the Aragons and the Kingdom of the Two Sicilies. Historic Syracuse offers a unique testimony to the development of Mediterranean civilization over three millennia.
Justification for Inscription

Criterion (ii): The sites and monuments which form the Syracuse/Pantalica ensemble constitute a unique accumulation, through the ages and in the same space, of remarkable testimonies to Mediterranean cultures.

Criterion (iii): The Syracuse/Pantalica ensemble offers, through its remarkable cultural diversity, an exceptional testimony to the development of civilisation over some three millennia.

Criterion (iv): The group of monuments and archeological sites situated in Syracuse (between the nucleus of Ortygia and the vestiges located throughout the urban area) is the finest example of outstanding architectural creation spanning several cultural aspects (Greek, Roman and Baroque).

The Syracuse/Pantalica ensemble, through its remarkable cultural diversity, offers exceptional testimony to the development of civilization over some three millennia.

Situated on the Mediterranean coast in south-eastern Sicily, and having always enjoyed a favourable climate while being relatively free of marked relief, the zone of monuments and archeological sites proposed for inscription on the World Heritage list has been inhabited since protohistoric times.

The Necropolis of Pantalica extends over some 1,200 m from north to south and 500 m from east to west in the region of Sortino. In the hilly terrain (caverns and precipices) and a natural environment of great beauty, about 5,000 tombs are visible, most of which have been hewn out of the rock face. Archaeological research has brought to light, in this zone, vestigial remains of dwellings from the period of Greek colonization. Materials of Mycenean origin and monumental structures were recognised, enabling the identification of the Anaktoron (Prince’s Palace). Similarly, it has been possible to identify a period of reoccupation of the site in the 9th-10th centuries: the zone was in fact used for the defence against invasions of Sicily by the Arab armies.

On the side which has been inhabited from around the Neolithic period, and certainly from the start of the 13th century, Syracuse symbolizes by its foundation the development of the Greek presence in the Western Mediterranean. This city, founded in the 8th century was, according to the Ancients, very large and extremely beautiful. Its central nucleus, today the island of Ortygia, controlled two natural ports which had already become famous in ancient times. Ortygia consisted of five parts, giving rise to its alternative name of Pentapolis. The two ports are still identifiable today: Porto Piccolo to the east and Porto Grande to the west. Ortygia has a central main street and a network of other streets reminiscent of the orthogonal plan of the ancient Greek city, constructed in the 7th century BC. The following Greek remains are visible (from north to south):

The Catacombs, the largest except for those in Rome, date from the palaeo-Christian period. Subsequently, many items bearing witness to the troubled history of Sicily remain, from the Byzantines to the Bourbons, with in between the Arabo-Muslims, the Normans, the government of Frederick II (1197-1250), the domination of the Aragons and the Kingdom of the Two Sicilies: Church of St John the Baptist (4th-16th centuries), Church of St Martin (6th-14th centuries), Bellomo Palace (13th-18th centuries), Migliaccio Palace, Abeba Dunieli Palace and Francica-Nova Palace (15th century), Church of San Francesco all’Immacolata (13th-18th centuries), Church of the Collegio (built by Jesuits in the 17th century).

The most celebrated monument, with its great square, is the cathedral, which incorporates the remains of a Greek temple dating back to the 6th century BC. The excavations carried out in 1996-98 under the square have advanced knowledge of the history of Syracuse and its ancient monuments.

Constituted in 1952-55, the Archaeological Park of Neapolis includes the most spectacular Greek and Roman monuments bearing testimony to the past of Sicily: the magnificent Greek theatre; the Nymphaeum zone (with the cave); the sanctuary to Apollo; the imposing altar of Hieron II (king of Syracuse in 265-215 BC); the Roman amphitheatre; the great stone quarries, also known as the lautumiae; the Grotticelle necropolis, which contains the so-called tomb of Archimedes.
Source: UNESCO/CLT/WHC

Syracuse, in addition to its own history – one of the most ancient in the Western Mediterranean (excavations and research have revealed a substantial human presence as early as the Neolithic period, and particularly from the 13th century B.C., and have confirmed the presence of the first Greek colonists – Corinthians who arrived according to literary tradition in 734 B.C.) – has experienced most of the vicissitudes of the history of Sicily in general.

The Phoenicians colonise the island.

The Greeks in turn set up settlement colonies on the eastern coast of Sicily (particularly at Syracuse) and establish trading posts rivalling those of the Phoenicians, and then those of Carthage, the Phoenicians’ western metropolis.

Syracuse, the island’s main city, exercises hegemonic control over the whole of Sicily (particularly under Dionysius the Elder: 405-367 B.C.).

Rome wins the 1st war against Carthage, conquers Sicily and makes it into a province, which then becomes a veritable granary. Syracuse is occupied after a very long and bitter siege (213-212).

Vandal domination is followed by the Byzantine conquest (which lasted until the 9th century).
– 9th-10th centuries:

The Arabo-Muslims, after conquering Sicily by defeating the Byzantines, turn it into an emirate. It prospers and Palermo, its capital, becomes a remarkably brilliant cultural and artistic centre.

Norman domination of the whole island.

Sicily becomes the centre of a rich and powerful monarchy, with the flowering of a brilliant and composite civilisation.

The Duke of Anjou, Charles I, brother of St Louis, is crowned King of Sicily by the Pope.

Sicily is in the control of Aragon.

The kingdoms of Naples and Sicily are united, forming the Kingdom of the Two Sicilies.
Source: Advisory Body Evaluation