Mourning for the death of the archaeologist Sebastiano Tusa 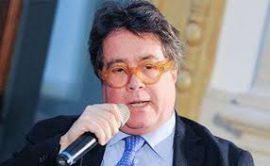 The country and the world of archeology are dismayed by the sudden disappearance Prof. Sebastiano Tusa (2/08/1952), Regional Councilor for Cultural Heritage, victim with many other people, of the plane crash of 10 March in Ethiopian territory .

Sebastiano Tusa, archaeologist of international fame, a man of culture politically engaged for the redemption of his Sicily.

Son of the esteemed archaeologist Vincenzo Tusa, who was superintendent of the Cultural Heritage of western Sicily in the 60s. Graduated in literature with specialization in paletnology. Director of the Sicilian Region.

In the nineties he was responsible for the archaeological section of the Regional Center for Design and Restoration. In 2003, during excavations conducted by him to Pantelleria, three Roman imperial portraits were found. He led the Superintendent of Trapani and in 2004 he was appointed the first superintendent of the sea of ​​the Sicilian Region.

He organized archaeological missions in Italy, Pakistan, Iran, Iraq. In 2005 he led the excavations at Mothia, bringing to light, on the submerged road that leads to the island, structures identifiable as quays. In 2008 he made a documentary film with Folco Quilici on the prehistory of the Mediterranean at Pantelleria. The excavations he promoted, and conducted on the field by Fabrizio Nicoletti and Maurizio Cattani, also confirmed the role of Pantelleria as a “crossroads for merchants” in ancient times.

Thanks Sebastian for everything done for science and for the legacy that leaves us. Sit tibi terra levis.

Posted on 11 March 2019Uncategorized
FacebookshareTwittertweetGoogle+sharePinterestpin it